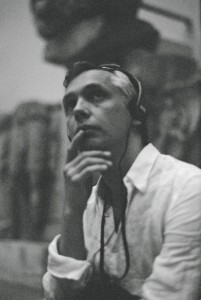 Andreas Köhler (1963) studied Cello and Piano at the Musikhochschule Karlsruhe and Musikhochschule Basel. He has played numerous concerts both in Europe and abroad with the SWR Orchestra Baden-Baden Freiburg.

Andreas Köhler experiments widely from a supple foundation in the cello, for example in the composition of short symphony elemental–The Secret Life Of Molecules– for Orchestra and Soprano. He collaborates ambitiously with the artist Hilary Koob-Sassen as The Errorists. In their 14+ years of increasing-close work and often hosted by ZKM in Karlsruhe, they have co-composed and co-produced the soundtracks for video works such as Faith In Infrastructure, 12 German Pop Songs and Transcalar Investment Vehicles (2013 EMAF Award at 26. European Media Art Festivals, 2014 Jury selection JMAF Japanese Media Art Festival), which are shown internationally. Furthermore, The Errorists have performed numerous and varied live concerts at venues such as the Barbican Art Gallery, British Film Institute , South London Gallery, Steirischer Herbst Festival Dictionary of War, ZKM, Sketch Gallery. Andreas Köhler has composed music for documentary films shown on SWR, Arte, Sat1.

Other musical experiments, which began alongside his formal training, have engaged the capacities of digital recording, composition, and arrangement. He has released electronic music with Harthouse (Metamorphosis), F-Communications (Soundofk), Glasgow Underground (Charles Silence Trio), Compost Records (Shahrokh Soundofk) and on his own label “livfe productions”. In 2003 he founded Comtune, a commercial production company, which has done work for Siemens, Nero, Memmert and Gaggenau. More mathematically, for Nero AG, he produced a set of sounds for an algorithmic composer.

He established and heads the MusikComputerWorkshops at the Zentrum für Kunst und Medientechnologie (ZKM) in Karlsruhe since 1999. Beside Ableton live Workshops like “Songs1” and “Songstwice” – togehter with Hendrik Vogel- the focus also lies on acousmatic music workshops always with the idea “the computer is an instrument”. Since 1988 Andreas Köhler is teacher of a celloclass at the Badische Konservatorium Karlsruhe.